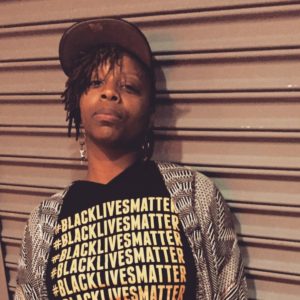 Patrisse Cullors, one of the three founders of the Black Lives Matter (BLM) Movement, is an “artist, organizer and freedom fighter” from Los Angeles, CA.  After the acquittal of George Zimmerman in the death of Trayvon Martin, Cullors co-founded the movement with a hashtag.

According to the BLM website, “Black Lives Matter is an ideological and political intervention in a world where Black lives are systematically and intentionally targeted for demise.  It is an affirmation of Black folks’ contributions to this society, our humanity, and our resilience in the face of deadly oppression.”

Historically, the Black Power movement has ignored black queer and trans women, but Cullors, who came out as queer at 16, ensures that the group speaks out for the black LGBTQ community. Cullors married black, transgender immigrant Janaya Khan earlier this year, but her Facebook page states that she is “in an open relationship with Harriet Tubman.” In interviews, Cullors has attributed this to her spiritual connection to Tubman, whom she believes was the original founder of the black lives matter movement.

According to her official bio, three weeks after Mike Brown’s murder in 2014, “Patrisse co-organized and participated in the Black Lives Matter Freedom Ride … as a part of Ferguson October’s ‘Day of Civil Disobedience’ she and other activists were briefly arrested at a local Walmart.” Following this, Cullors went on a 10-day trip to Palestine in order to be an “example for how Black folks and Arab communities can be in better solidarity with one another.”

Throughout her career as “artist, organizer and freedom fighter,” Cullors has been awarded such honors as The World’s Greatest Leader by Forbes, an Honorary Doctorate by Clarkson University, Disruptive Advocate Award, Community Change Agent Award, Justice Award and Defender of the Dream Award.

However, despite the global success of the BLM movement, Cullors is not satisfied. At a presidential debate, she stated, “Let me be clear – every single day people are dying, not able to take another breath. We are in a state of emergency. If you do not feel that emergency, then you are not human.” While Cullors and her organization call for equality and protection for those obviously targeted, Cullors had very little to say regarding the Dallas incident.

Despite the fact that as the Dallas incident showed that whites, specifically cops, are being targeted, Cullors maintains that (in an article with Jamil Smith in New Republic) “black folks across the country and the globe are systematically targeted, and that our lives are on the line on a daily basis, and that, ultimately, this is a life and death issue for us.”

On her official bio on her website, the ending statement is bold: “Patrisse will continue to create, organize and shut it down until all Black lives matter.” As the nationwide protests, that have resulted in the closure of federal highways and numerous arrests that have taken place since the incident in Dallas, one can take that statement seriously.

Signup for the Newsletter